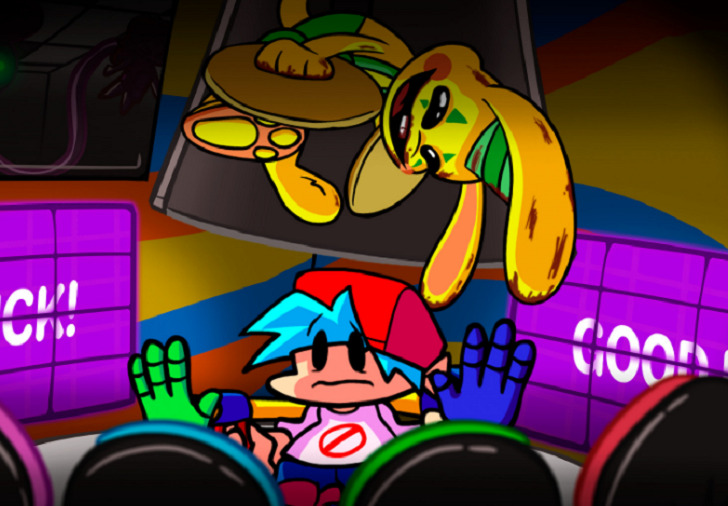 Every fresh FNF mod introduces new characters against whom Boyfriend boldly enters another rap battle. And this time you are going to fight against Bunzo Bunny! Who is he and what should you expect from him? This anthropomorphic rabbit is one of the toys that you can meet in another game, Poppy Playtime. Like everyone else, he was produced at the factory when a mysterious paranormal activity made the entire staff vanish and turned all the toys into evil monsters. Now he is hunting those who risk stepping inside the factory together with his teammates. So as you see, he’s rather dangerous and you should beware of him even on stage!

The new Friday Night Funkin mod will allow you to savor some previously unheard songs and find out what it’s like to rap against Bunzo Bunny. The gameplay remains the same – you have to press the right buttons following the rhythm of the music and the clues on the screen. There will be a sequence of arrows floating over Boyfriend’s head and pointing in different directions. Match the moves of your fingers over the keyboard to them and keep up with the beat – and you’ll definitely be able to show a good result! The one who earns more points in the end of the third round wins. It’s advisable to start with the easiest difficulty level and also go through a training mode first. But if you feel like you’re already experienced enough, you can plunge straight into the extreme difficulty! Have fun!

FNF vs Hex Reanimated with Lyrics